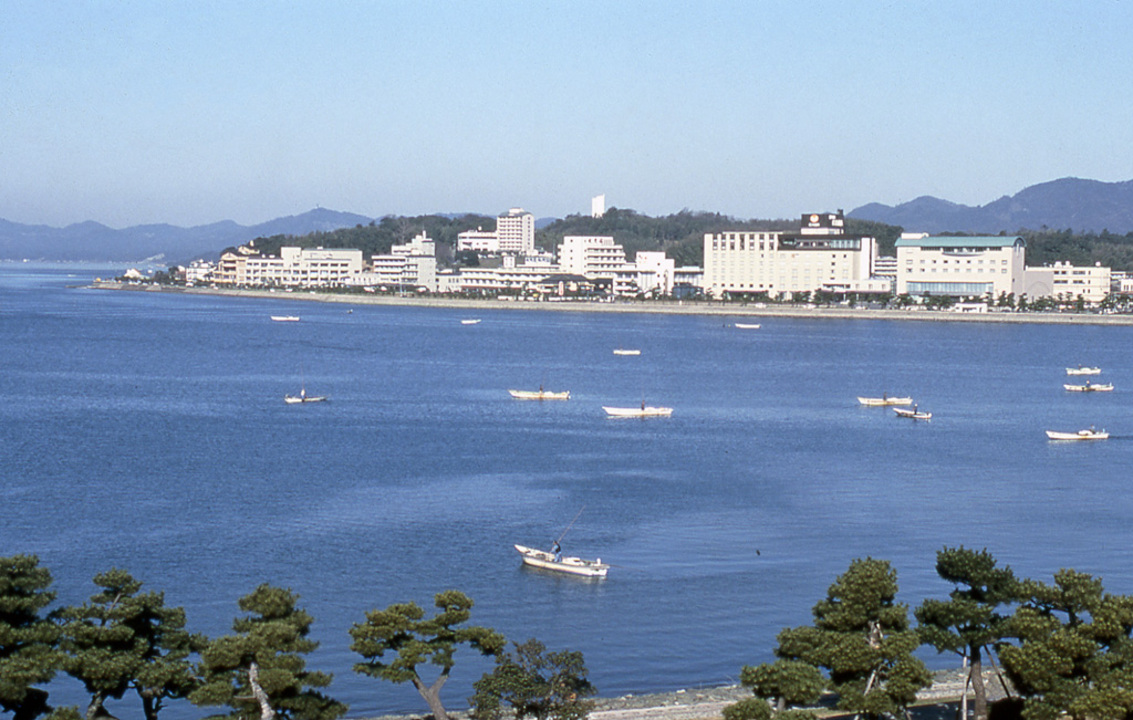 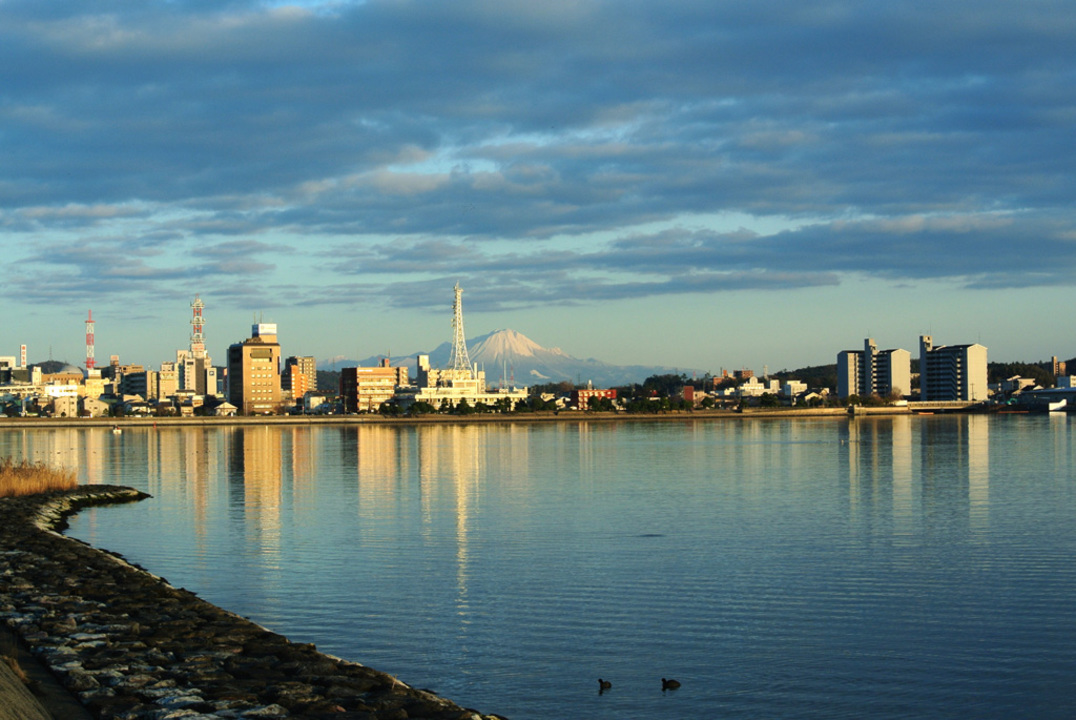 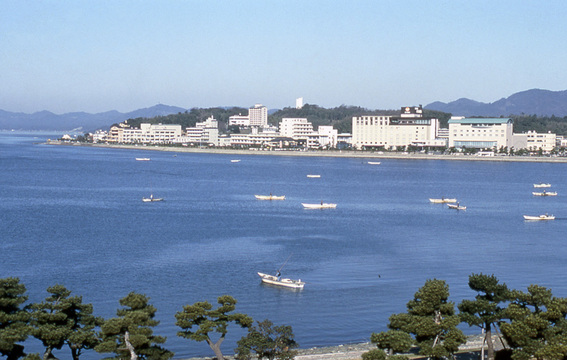 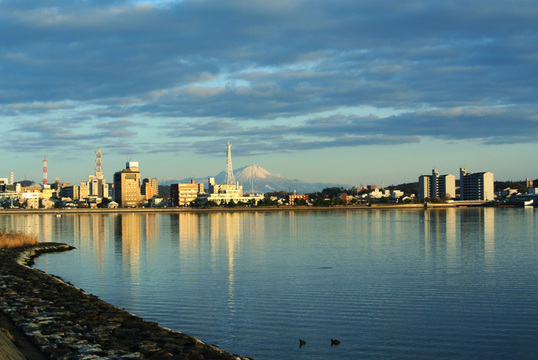 Named ‘Shinji-ko’ in Japanese, Lake Shinji is Matsue’s foremost symbol as the “City of Water”. It is the seventh largest lake in Japan, with a circumference of about 45 km (28 miles), making it 16 km from east to west, and 8.5 km from north to south. Lake Shinji is known throughout Japan because of its spectacular scenery, in particular that of the sunset as it sets over the lake. You can enjoy a view of Lake Shinji from the top of Matsue Castle, or the observatory floor by Shirakata Park.

Shinji is a brackish lake, a combination of both salt and fresh water, due to the flow of sea-water into the lake via Lake Nakaumi. Nakaumi, located east of Matsue, is the fifth largest lake nationwide. Home to a wide variety of fish and clam species, and one of the largest wintering spots for waterfowl in Japan, Lake Shinji and Nakaumi together are designated as a Ramsar Site of Wetlands of International Importance (since 2006).
[More info about Nakaumi in Daikon-shima Island] 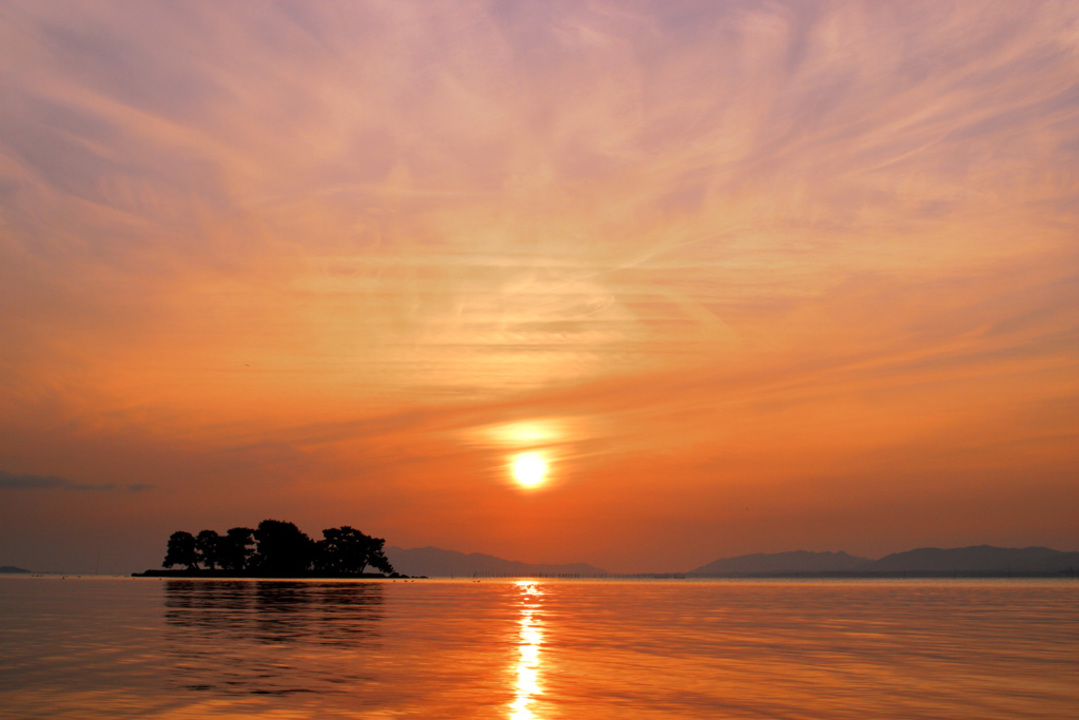 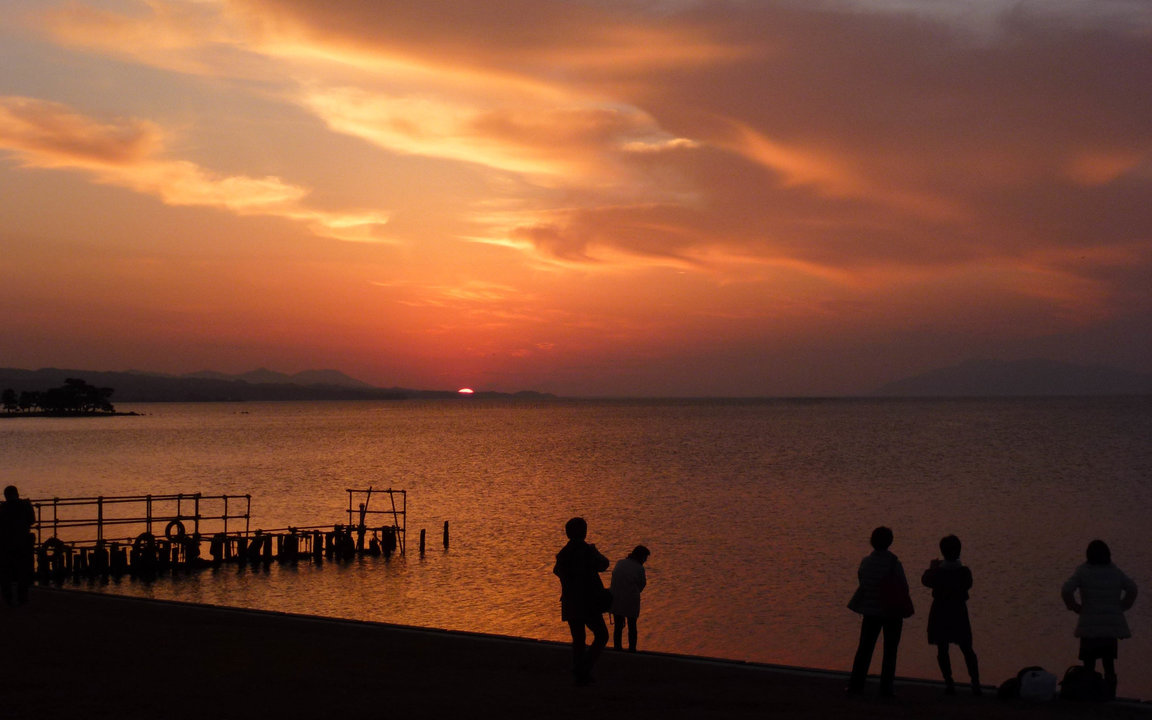 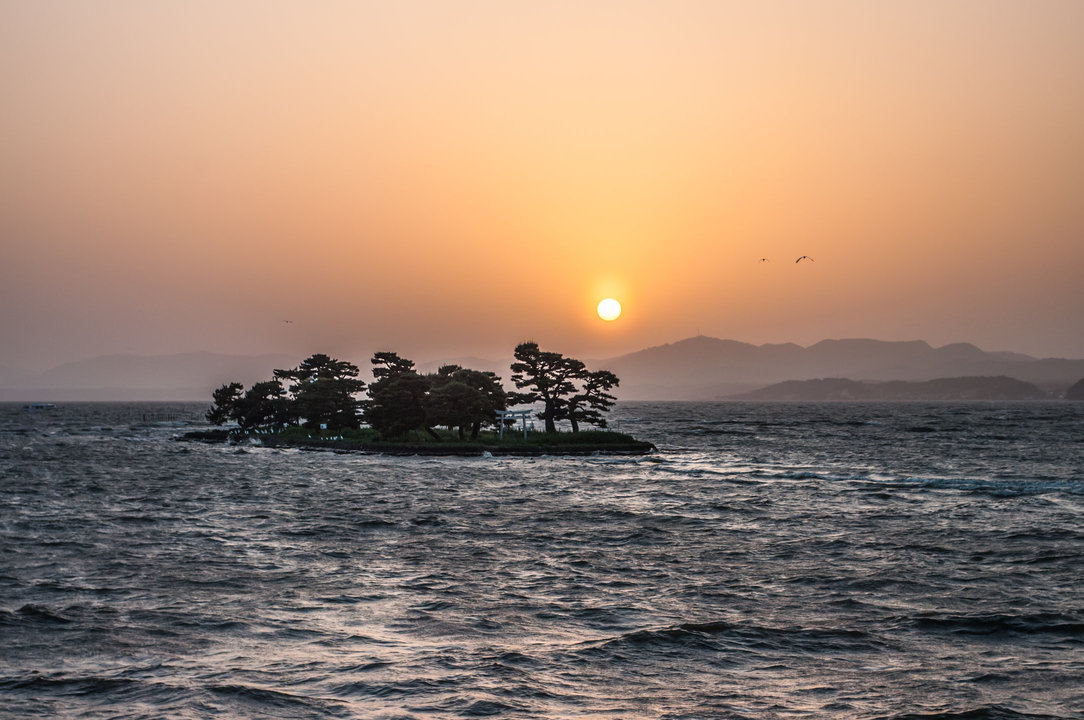 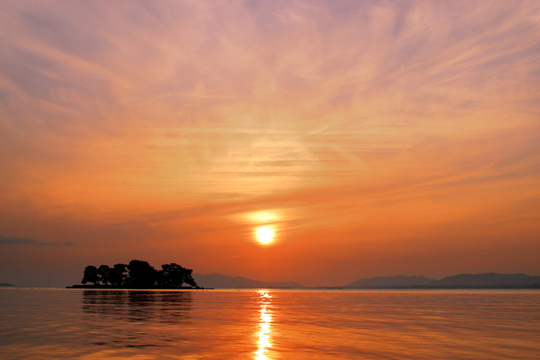 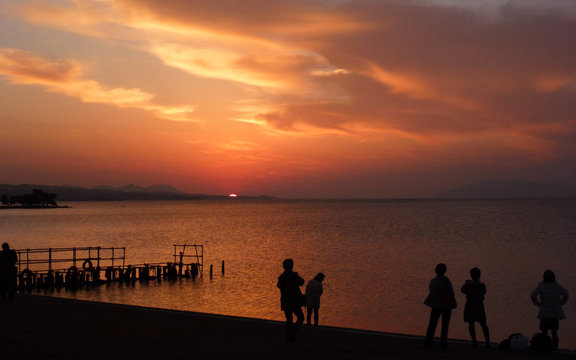 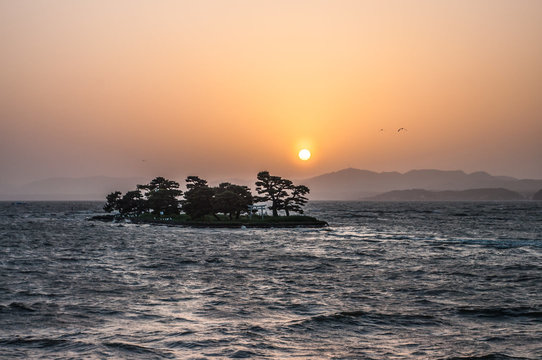 Central Matsue is a great spot to watch Lake Shinji’s magnificent sunsets. This view has been included in Japan’s list of one hundred best sunsets, and it’s not hard to see why, as the colours not only change over the final fleeting moments of daylight, but also vary in time over the changing seasons. These dancing colours of the sky reflected in the lake keep both visitors and locals captivated by their beauty.

We recommend watching it from anywhere along Shirakata Park, from the Shimane Art Museum or the sunset viewing spot, which is located south of the museum along the lakefront promenade. From there, you can enjoy the closest view of the petite island of Yomegashima.
Lake Shinji Sunset Information Website
This webpage, available in many languages, has been set up to communicate the wonder and beauty of the Lake Shinji sunset. It is also the first Japanese website to provide sunset forecast information. 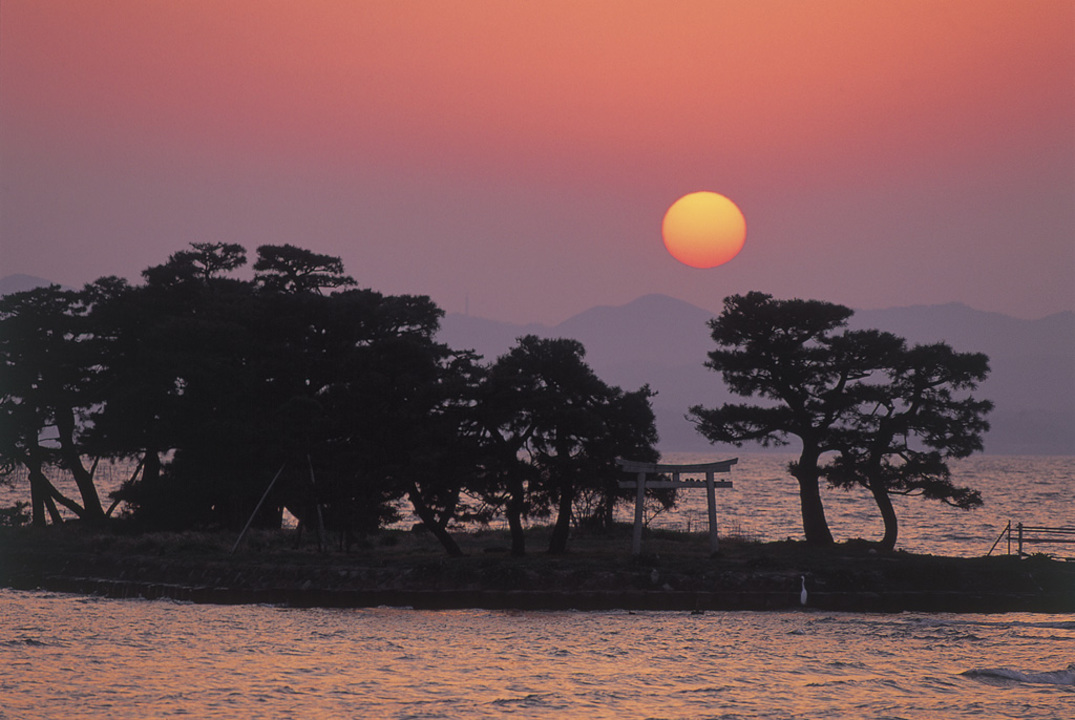 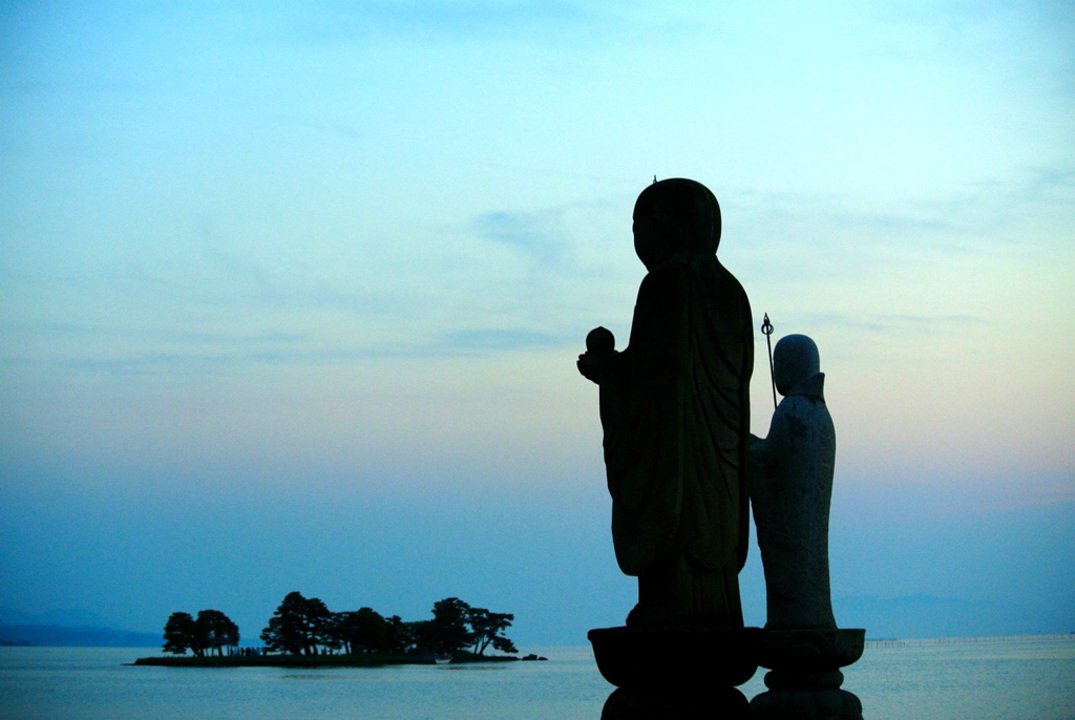 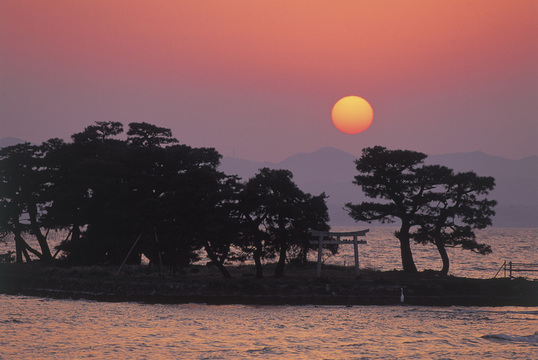 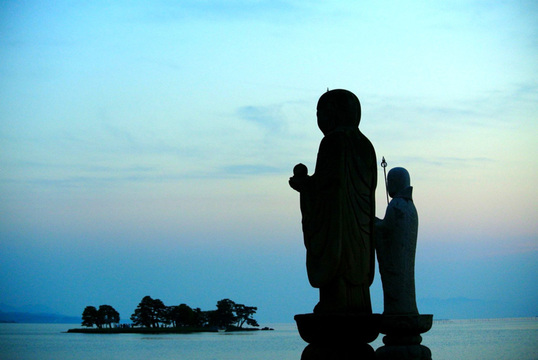 Yomegashima is the sole island in Lake Shinji, located 200 metres from the lakeshore. Being a sanctuary dedicated to the goddess Benten, a sacred Torii gate sits at one extremity of the island. As if floating upon the surface of Lake Shinji, this is an aesthetically pleasing sight with its perfectly oval shape and pine trees speckled over it. Literally meaning the “Bride Island”, a legend tells of a homesick young bride who drowned in the lake when trying to cross it when it was frozen over, and the gods who took pity on her and raised an island where she fell.

In addition to lending its perfect silhouette to the backdrop of the sunset, in October, the island is also illuminated at night. As it is a sacred island, it is inaccessible for most of the year. However, members of the public can visit during special occasions. If one of these special events is not going on during your stay in Matsue, you can still get a closer look at the island by boarding the Lake Shinji Pleasure Cruise (see below). 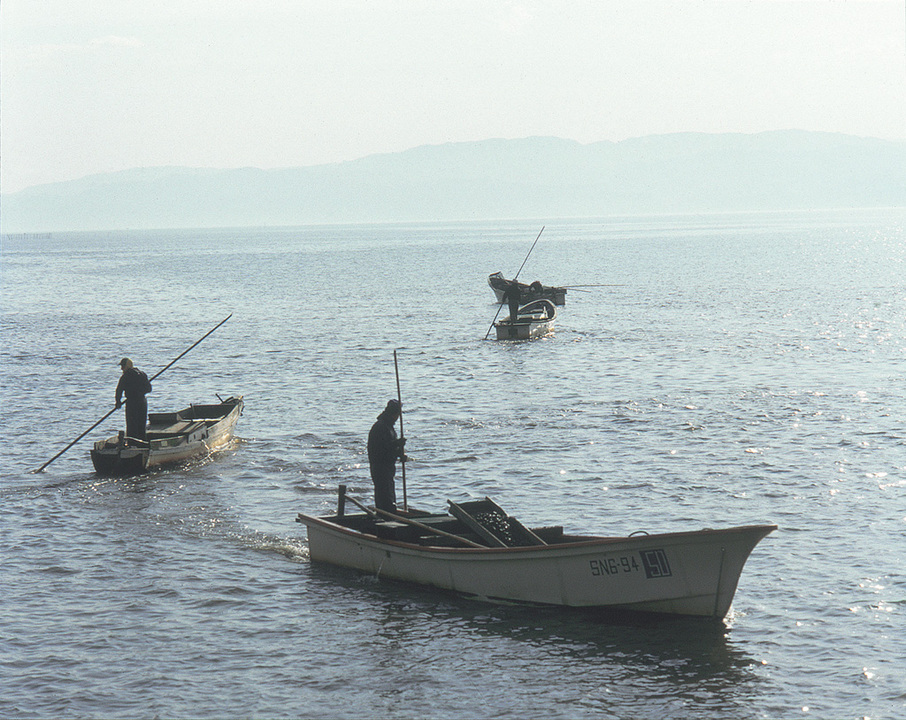 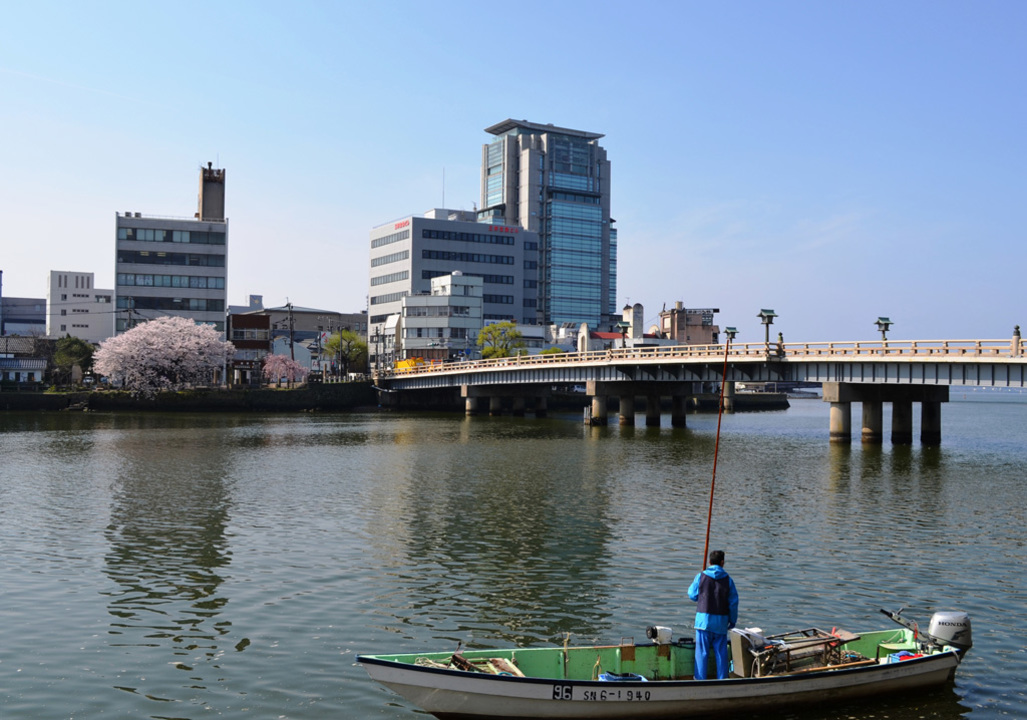 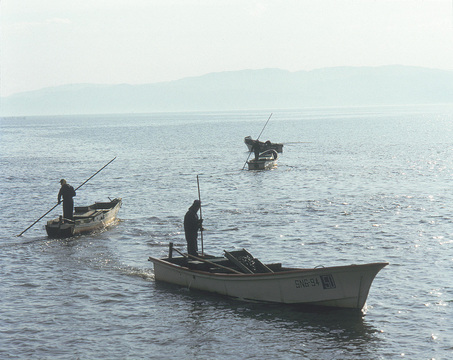 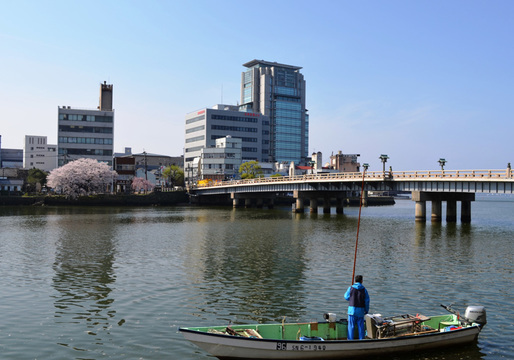 Lake Shinji is synonymous with Shijimi clams, among the many other fish and shellfish found there. These clams are incorporated in various local dishes. This variety of clam, also known as Yamato Shijimi (corbicula japonica), is larger than other kinds of Shijimi and is well-suited for miso soup and other dishes. Try some while you’re here, or buy some handy packets to make this nutritious dish once you get home!

Early in the morning (Mon/Thurs/Fri) enjoy the beautiful view of the white fishing boats on Lake Shinji and Ohashi River as they gather Shijimi clams. The fishers of Lake Shinji take in one of the largest hauls of Shijimi clams in Japan, coming to a grand total of approximately 6,000 tons per annum. The Shijimi shellfish are gathered using a tool resembling a basket tethered to a rake. This rake-like tool is called a ‘joren’. The sight and sounds of the early morning fishers speckled across the lake provide a peaceful view for early risers. 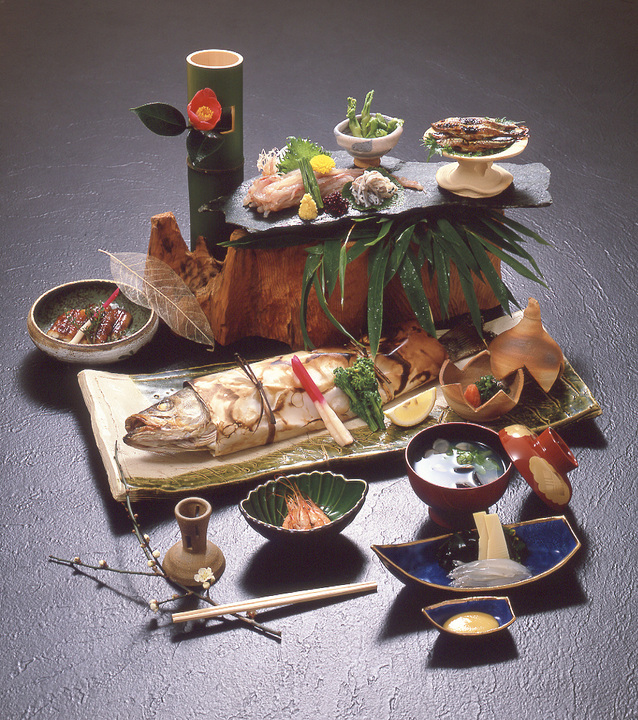 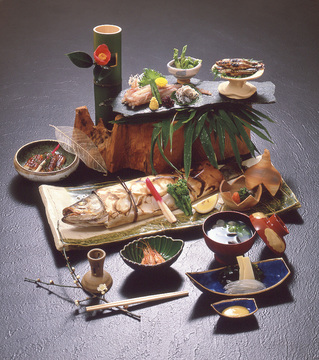 Lake Shinji is connected to the Sea of Japan via Lake Nakaumi, and therefore has a mix of fresh water and salt water, giving rise to a unique and varied food culture. The whitebait of early spring, the Shijimi clams and eel of summer, the shrimp of autumn, and the bass, smelt, and carp of winter are collectively known as the seven delicacies of Lake Shinji, "Shinjiko Shicchin".

The amounts and variety of fish that can be harvested from Lake Shinji varies throughout the year, so try out some local restaurants to taste the season’s best during your stay. The Shijimi clams, however, can beharvested all year long, are certainly the most famous and easy to find in various delicacies. A centre dedicated to this yummy clam is located in the hot spring area of Shinjiko Onsen, on the north bank of Lake Shinji. There, in addition to a fine selection of Shijimi and other edible items, you will also find a souvenir shop. There is a free foot bath (ashiyu) located next to the Shijimi Centre, where you can relax and chat with locals. 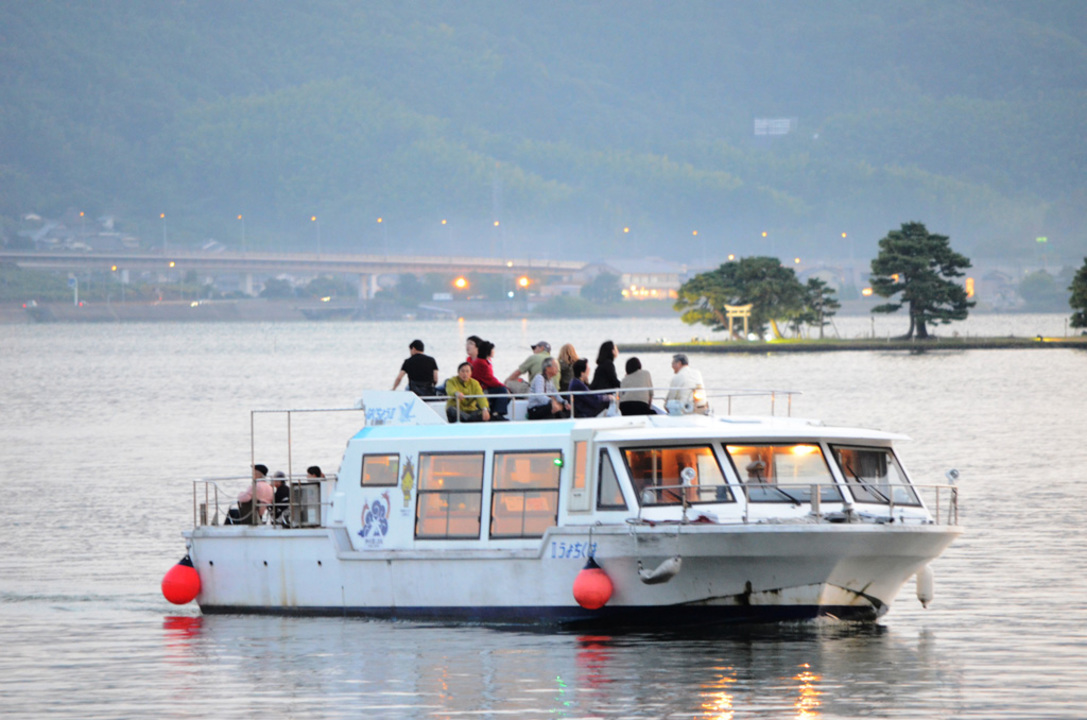 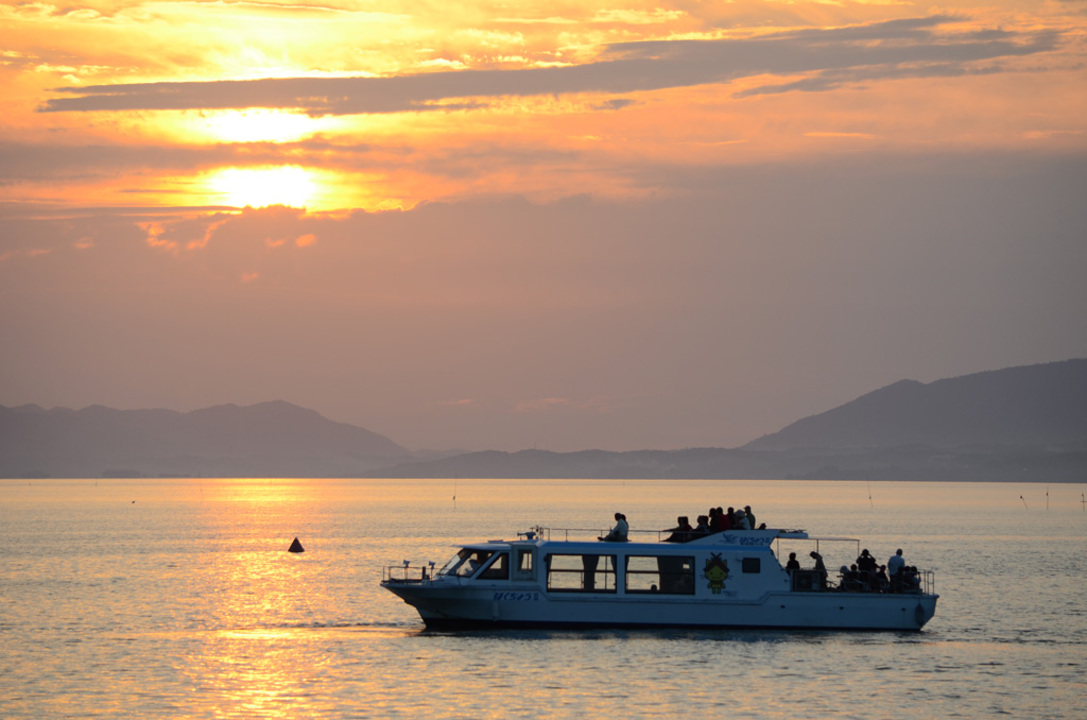 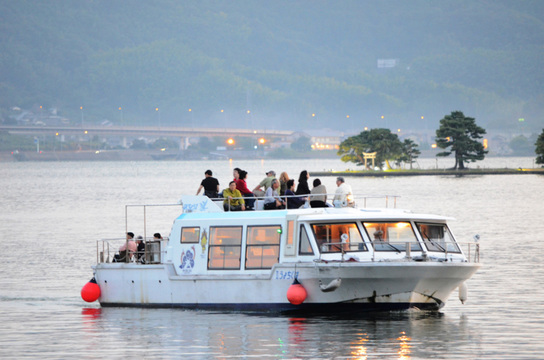 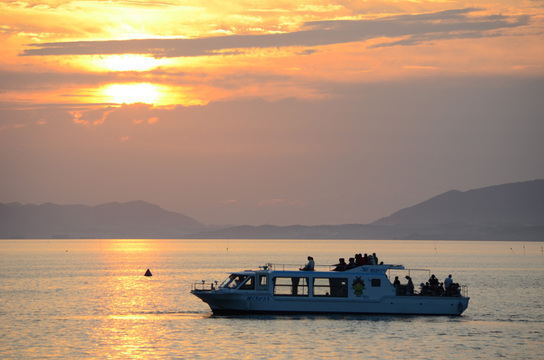 While a stroll along the lakeshore already provides an interesting view of the lake, you can also enjoy the lake’s scenic beauty from the cruise boat, which also runs a special sunset cruise. This sightseeing boat takes visitors on a one-hour tour around Lake Shinji. There are five or six tours per day, and the last tour each day, the ‘Sunset Cruise’ is particularly popular, as it offers the opportunity to view the vibrant colours of the sun streaked sky and lake surface from closer to the action. If reservations are made in advance, it is also possible to taste the "Seven Delicacies of Lake Shinji" in a bento box!

Socho Fresh Cruising is a special morning cruise that allows you to experience the spectacular morning scenery on Lake Shinji, while the Sunset Cruise gives you the opportunity to enjoy the sight of the setting sun at its very best. Meals can also be served on board if booked at least one-day in advance. Boarding points are located on the southern shore of the Ohashi River.